MONKEY, A PAINTING, AND CHILDREN WHO ARE DIFFERENT

Home / Davyd Whaley / MONKEY, A PAINTING, AND CHILDREN WHO ARE DIFFERENT 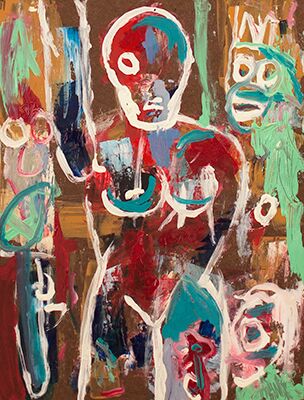 Davyd Whaley remains constantly on my mind. I’ve been going through his journals, and studying his paintings to commune with him, and in the process I’ve come to learn more about him, to understand him in a deeper way. It’s amazing how much I didn’t know, even after ten years; how many things he wrote about and observed that he didn’t share; about our life together, about his life before me, and about the world at large.

He had a silent watchfulness. He was so aware and so present. I have never met a person who listened with the attention that he did, and who reflected upon what was said, and then wrote or painted about it in such a profound way.

Davyd frequently talked about how he would paint from his dreams. He kept copious notes, and dozens of journals, recording his dreams in detail and his thoughts about them. 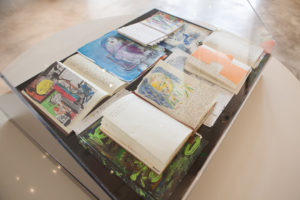 As I read these journals now, one of the most heartbreaking aspects of his death is how hard he was working to integrate many of his early childhood experiences of loss into his adult life, both in his art and his writing.

I have written before about how difficult it was for him growing up. He felt repeatedly betrayed as a child and I don’t think that wound ever healed. From what I understand, he was abandoned at 3, moved from relative to relative, spent time in a group home and various foster homes, before ending up again at some point with his mother and stepfather.

In our ten years together he never once mentioned the words “my mother,” instead only ever referring to her as “the woman who bore me” or “the female caretaker.” As far as I know he never spoke to her as long as I knew him, nor have I heard anything from her since he died. He also never spoke to his older half-brother or half-sister.

He did speak with affection of a younger half-brother, his father’s son by another marriage (also curiously named David, which was why Davyd changed the spelling of his own name) and also some various cousins. But he seemed frightened of re-engaging with any of his relatives, because it seemed to bring up too many painful memories. Whenever people asked him about his family, he simply said, “Norman’s family is my family.”

MONKEY was one of his paintings, which sold last December at Art Basel in Miami. Often he would write essays about his completed paintings, but there was none about MONKEY. However, I found an entry in his journal last weekend that seems to be the source of inspiration for it. 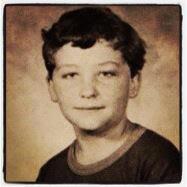 My intention in sharing it is to honor Davyd, and his struggle. And to honor the struggle of others like him, who are rejected by their families for being different:

I dreamed I was on a bus. There was also a pregnant woman on the bus.

It reminded me of when I was a boy and used to pretend to be pregnant with my toy monkey. I would stuff it under my shirt when I was 8 years old and walk around upstairs in the blue room of the farmhouse, pretending like it was a doctor’s office. I would wait in imaginary chairs in the hall and then go with my monkey baby in my stomach into the blue ˜examining room.’ I would then change into a woman’s nightgown, from my husky jeans, being careful not to lose my monkey baby in the blue wooden closet, and wait until the doctor called my name to examine me. The imaginary doctor would have me lie on the cast iron bed in the silk pink night gown, with my monkey baby underneath it, as he did my exam. I remember hoping my baby would be okay, and soon enough the exam ended as I was rushed by pretend ambulance to the pretend barn hospital’ in the silk pink nightgown, holding my monkey baby stomach.

Trouble found me, after I gave birth to my monkey child in the barn.

‘You’re getting a whipping!’

‘Get me that belt! What the sam hell are you wearing?’

This was the first time I was, or remember being, knocked unconscious from a beating. I think the woman was so upset about me wearing her nightgown and thinking how strange it was for an 8-year-old boy to be walking out in the field in women’s clothes.

My thoughts of being on a bus in a dream last night come back to me as I remember that day in the horse field outside the barn.

Analysis”The dream occurred on Martin Luther King’s birthday, which has some significance for me and reminded me of Rosa Parks not wanting to give up her seat on the bus, during the civil rights movement. She wasn’t willing to budge. As a young gay man, struggling with issues of gender and sexuality, I also wasn’t willing to budge. My subconscious draws some kind of strange parallel imagery and correlation to connect the two fights for personal freedom of choice and basic rights. I had many continued struggles with this family over my sexuality growing up in the Appalachians.

As a young man of 8 years I truly didn’t understand that I was gay. I only knew that I was expressing myself differently with different beliefs than these people. These feelings were instinctual and these actions were coming from a place of childlike expression. But it threatened their religious and political thought processes, because they found the behavior to be effeminate for a male. My ˜anima’ manifested at a very early age. It wasn’t sexual in any nature. My behavior was to ˜nurture.’ I was trying to CREATE for the monkey baby what was not available to me or for me in a female form.

I gave birth to fantasy.

I incubated new life, and energy into the world. I imagined something in me that’s alive.

My psyche was seeking balance, compensating for what was lacking, becoming my own maternal role model, protecting myself, since there was no one else who would do it for me.”

Continuing to grow to know Davyd, through his writings, through his art, makes me more glad than ever before that he gave me the privilege of being his partner in this life. His goal in life was to pursue his inner growth and, through his work, to share what he learned. His writing is beautiful, and his soul was so gentle.

I’ve also come to understand what he had to endure growing up. Some of the other experiences he describes in his journals are quite harrowing, too upsetting to share, shocking in their descriptions of intolerance, neglect, and abuse and I am amazed by his courage and his strength. He did not give up his seat on the bus, in the face of religious superstition, prejudice and unspeakable cruelty. Instead he created a life for himself that was lovely and kind and generous. I thank God every day that he chose to share that life with me.

That is, at least, until he grew tired of watching the havoc that has been wrought all over this planet, in the name of misguided absolutism; until he grew weary of the meanness of people who mistreat and bully children, and the type of people throughout our society today who enable them by suggesting that gays are evil and malevolent; and that some people are worth more than others. In the last days of his life, he kept talking about how cruel the world had become and how sad it made him.

Or maybe the simpler truth is that the repeated head injuries he endured throughout his life, and the seizures and the migraines which plagued him, finally took their toll, and his suicide was the result of repeated trauma to the brain, similar to what we are now seeing almost everyday in the news, regarding football players and war veterans.

And yet. As angry as I feel towards those who treated Davyd poorly in this life, I keep coming back to a poem (by Rabbi Harold Kushner) which Davyd posted in February of this year:

“Let the rain come and wash away

the ancient grudges, the bitter hatreds

held and nurtured over generations.

Let the rain wash away the memory

of the hurt, the neglect.

Then let the sun come out and

fill the sky with rainbows.

Let the warmth of the sun heal us

wherever we are broken.

Let it burn away the fog so that

we can see each other clearly.

So that we can see beyond labels,

beyond accents, gender or skin color.

Let the warmth and brightness

of the sun melt our selfishness.

feel the sorrows of our neighbors.

And let the light of the sun

be so strong that we will see all

people as our neighbors.

Let the earth, nourished by rain,

to surround us with beauty.

And let the mountains teach our hearts

to reach upward to heaven.” 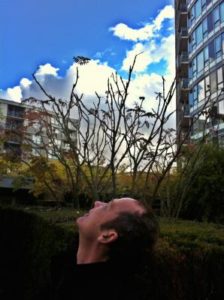 I have so many pictures of Davyd where he was looking upward to heaven. I believe that he was struggling to forgive. Therefore so must I.

Davyd will continue to be my role model. For me, he will represent all that is holy and right in this world, in the face of so much misinformation and misunderstanding, so much hatred and ignorance.

He continues to remind me that the child within us is the most courageous of all.