ILLUSION AND TEMPORARY STATES OF BEING

Home / Davyd Whaley / ILLUSION AND TEMPORARY STATES OF BEING 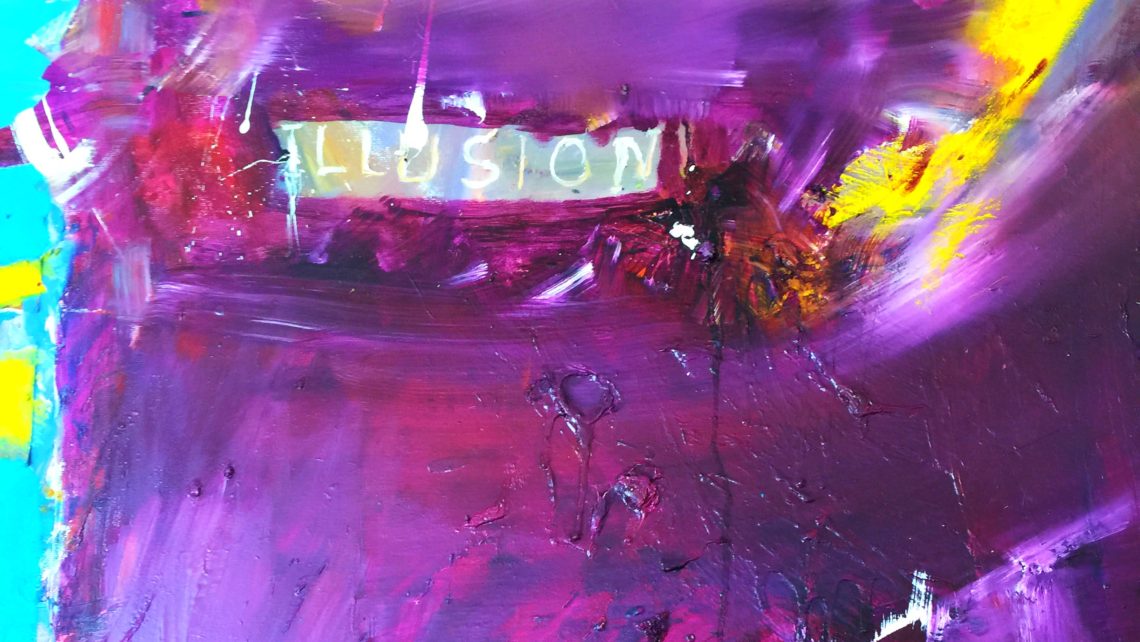 I was in Atlanta working for the last five weeks. I just returned home a couple of days ago to a quiet house. Now that I am home I realize I must face the task of finding a “new normal.” Traveling with work has kept me in a kind of limbo, but here i am now and things must begin to pull together again.

It has been five months since my spouse Davyd Whaley took his life. It’s still hard for me to comprehend, though as I go back through his journals and as I look at his paintings and drawings I see that the signs were there. He’d clearly been kicking the idea around for a long time, struggling valiantly against it, but growing increasingly weary of the struggle. The clues were there, and yet there was nothing for me to do. Even if i had noticed the clues and said, “Are you thinking of suicide?” his answer probably would have been no. He was good at hiding in plain sight. And I have to accept the fact that ultimately this was HIS choice to make. If he wasn’t going to share it with me or with his doctors, once he’d made the decision I could not have stopped it. It brings me to the limits of my control; it brings me face to face with my own grandiosity in thinking that I could have saved him from whatever those forces were that drove his decision. Part of the “new normal” must be to let go of my guilt. I did the best I could.

I spend a lot of time looking at his paintings. It’s a way to stay connected to him, to contemplate his process, to try to understand. It’s a way for me to find meaning in the loss. I am currently planning a memorial exhibition of his work for later in the year and I’m in the process of setting up a foundation in his name to provide art scholarships in the future.

I’ve also been trying to decide which paintings to keep for myself, which to give to friends, and which to sell. Last week I had three paintings pulled from the gallery, which have particular meaning for me, and now have them hanging here at home. 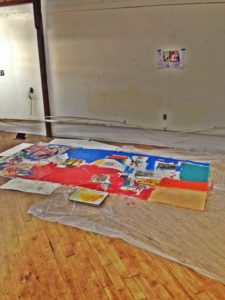 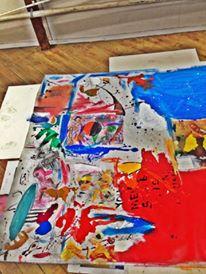 The three are a series he painted when we were in New Orleans in the fall of 2013. He called them YOUR MENTAL ILLNESS IS AN ILLUSION I, II, and III.

“The title YOUR MENTAL ILLNESS IS AN ILLUSION refers to a certain archetypal personality; someone who is victimized often, although there is no real assailant.

This painting is about Jungian archetypes. The philosopher archetype in the center, shown as Christ, holds the painting together.  He shares his wisdom with the rest of the world. The child archetype, Coca Cola, has one goal: to find nirvana. To achieve this state he must remove all obstacles on the left side of the painting. A positive, cadmium yellow cross indicates a utopian belief in a perfect world. 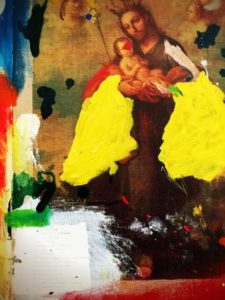 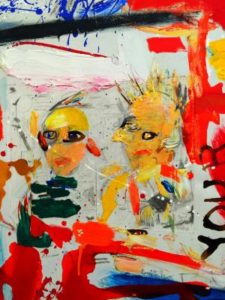 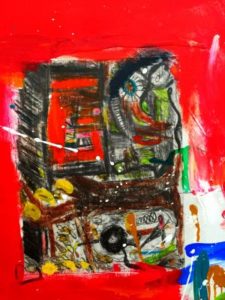 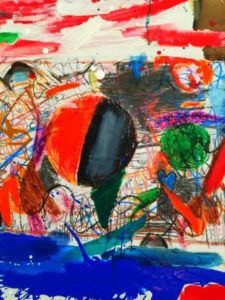 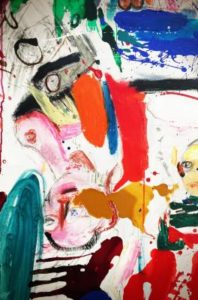 The mother is martyred in the work, shown upside down with her breast exposed to nurse and support the others in the painting. Throughout the work there are other archetypes, including the hero, struggling for redemption. These archetypes demonstrate action-based performances to be noticed or are present to provide support for others.” 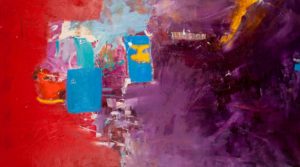 He wrote about the second painting in the series:

“This work deals with the illusion of mental illness in the face of an ever-changing reality.

The painting has direct relation to the Dionysus archetype, the mystery of religion, as in ‘spiritual intoxication,’ and is also inspired by the colors of Mardi Gras.  When I created the work I was thinking about how people often hide behind a mask instead of showing true feelings. The red in the painting represents the tendency to easily fall in love.  The deep purple represents justice and the gold represents power.

Identifying and befriending my own unconscious behavior is a way of healing illness and having a richer experience of reality. Jung stated that if one wanted to understand one’s own mythology and heal the illusion of separateness, then one must be comfortable dealing with the mentally ill and the ‘ghosts of the dead,’ as he called them. My painting is my way of doing that.” 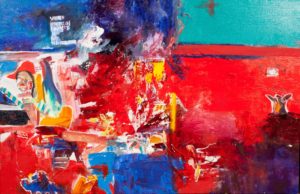 In the third painting, there are the words, “Your mental health is an illusion.” I was puzzled by this statement, and by the fact that he titled the series saying essentially the opposite, YOUR MENTAL ILLNESS IS AN ILLUSION.  When he was hanging the paintings for his last gallery show, just over a year ago, I asked him about the discrepancy. He responded, “It’s both, Norman. Don’t you see that? Neither health nor illness is the thing that defines a person. Those are only temporary states.”

There is a recording at this link of Davyd describing his work on the paintings: https://galeriemichaeldavydwhaleyaudio.wordpress.com/2014/02/22/davyd-whaley-your-mental-illness/

He talks about how deeply affected he was by Hurricane Katrina, and how that event informed his work on these pieces; how our time in New Orleans in 2013 reminded him of the great pain that so many suffered, and the heroic struggles of so many to continue in the face of such loss.

Katrina happened in 2005 while Davyd was recuperating from a severe nervous breakdown. I remember him crying as he watched the devastation unfold on television; it was the last time he ever watched the news as he found it too upsetting to his psyche. He was deeply troubled by the lack of an adequate response to the hurricane, the subsequent flooding and displacement of so many, and on a larger level he was haunted by man’s inhumanity to man.

In the recording he also talks about the iconography of saints, and their protection of the living. Davyd was deeply spiritual and always searched for the numinous in the mundane. He believed in angels, in the idea that they were all around us, that they arrived in the form of friends and strangers, and he believed in the idea that there is a deeper, more substantial reality beyond that we can see or acknowledge.

I recognize now this is an underlying theme in much of Davyd’s work the constantly changing nature of our reality, and the ways in which we try to make sense of that. His paintings were frequently about the ephemeral: states of mind, seasons, flowers, butterflies; philosophical statements about that which is constantly transforming.

Five months ago, the worst thing that could possibly happen to me happened. Davyd’s psychological immune system was ultimately weak and he succumbed to a temporary state of mental illness, just as one might to the flu or pneumonia if one’s physical immune system were weak.

The loss of him felt like the utter annihilation of my happiness. These last five months I have felt abandoned in an endless purgatory from which I often doubted I would ever escape.

But I recognize that I am not the only one who has suffered loss. No one is immune from pain. We rail against that which we cannot control, but there are so very many things we can’t control. Life seems to be about learning to be at peace with that, to accept that maybe it’s not our job to control it, but to just be with it. And to simply carry on, just putting one foot in front of the other.

I take heart in the idea that this reality is not the final destination, and indeed for some people this reality is just too hard, too much of a struggle. That doesn’t make them wrong for succumbing. It just is. And while surviving a suicide certainly seems like rougher water than what most ever have to deal with, I’m beginning to realize that for me it can be seen as its own kind of meaning, in that it has broken my heart open and made me feel more compassion for others; the same kind of compassion that was so much a part of who my dear, dear Davyd was. He was the kindest of men. He was absolutely heroic in his kindness towards the pain of others, in spite of the cruelty that he himself had endured as a child. He exists as a reminder to me to continue to love in spite of the pain.

So slowly, my sense of happiness begins to grow again, like flowers after a long winter. I begin to laugh with my friends, find joy in the presence of my colleagues, take comfort from my pets, feel purpose again as I get up in the morning. I must accept what has happened and find a way to carry on.

I believe it will all be all right in the end. As hard as it is to accept illness, death, and loss, it is an intrinsic part of this realm we think of as reality, and it is part of everyone’s human experience. But, as Davyd said to me: it’s only temporary; it doesn’t define us. Davyd is not defined by his final mental illness, no more than he is defined by those times when he was healthy. He is defined by something beyond all that, which we call the soul.

Davyd’s paintings help me. I was meditating last week and it was as though I could hear his voice saying to me, Focus on the second painting. The word ILLUSION sits there prominently, reminding me not to become attached to that which is passing. This brief, passing life of the individual ego is just an illusion; the separation is just an illusion, the things and ideas and differences and semantics that we cling to are just an illusion in the midst of an ever-changing cosmos.

Albert Einstein said, “The most important decision we make is whether we believe we live in a friendly or hostile universe.”

I believe in a friendly universe, in which nature is always changing and moving towards equilibrium; a universe in which that which we call God guides the revolution of the planets around the sun. I don’t understand it, but there seems to be order amidst the chaos, certainly a greater order than what I, with my limited awareness, will ever be able to comprehend. I prefer to think of that order as love, another word that cannot do justice to the experience behind it. But love surrounds all of us, if we care to focus on it, and it surrounds me and permeates my household; constantly reminding me of the truth, stated eloquently from the paintings on my walls. 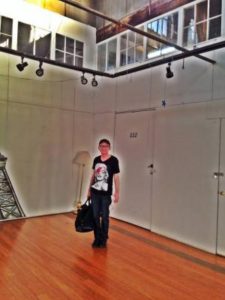 “Dream delivers us to dream, and there is no end to illusion. Life is a train of moods like a string of beads, and, as we pass through them, they prove to be many-colored lenses which paint the world their own hue, and each shows only what lies in its focus.” — Ralph Waldo Emerson