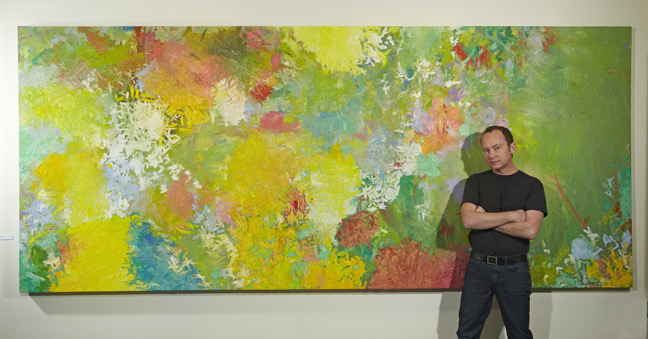 It’s been five years today since I lost my husband Davyd Whaley. I’ve heard it said that it takes half the time you were with someone to get over the loss. I was with Davyd for ten years.

Whatever they may say, I’ve realized that I will never get over it, but at this five year point the pain has transformed into something else—a wistful melancholy; a willingness to face the fact that Davyd’s life was complete at 47 years; a hard-won wisdom; an acceptance of the impermanence of all things, including happiness and sadness. All feelings morph into something else. Nothing in the physical realm stays the same.

In the years since Davyd died I have sought diversion; been a workaholic; frequently had too much to drink; watched too much TV; been unhealthy; stopped drinking altogether; then regained my health; read a lot; dreamed a lot; written a lot; and, among other hobbies, started to dive into genealogy. As I study the lives of my ancestors, I realize that there is no normal, acceptable length of life. Existence is completely unpredictable in its ever-changing rhythms. The lives of those who came before me vary as much as the leaves on a tree. Some hang on longer and some drop early. Some died in childbirth, some came down with unexpected diseases, some lived to be very old and probably wished that it ended sooner. There is no normal. Life is unpredictable in all respects—the joy and the difficulty. I guess that is what one can truly say about life: it is joyous, it is difficult. There is so much that is miraculous and there is also no easy way; and ultimately no escape from that which hurts.

It’s inevitable that all of us will discover there is no place of safety or resolution. The physical experience we have here on earth is one of becoming and only becoming. It is an experience of searching for meaning, of searching for definition. For ten years Davyd gave my life meaning and definition, and now I find that the meaning he brought to my life remains, even in the face of no anchor. I find the meaning and definition now in the becoming.

I met Davyd as I was walking out of a gym one day in 2004 while he was walking in. We passed each other and both turned around at the same moment. It was a moment of recognition and it was instantaneous. We were rarely apart until Davyd’s death. I had lived almost 48 years before I met him, and I can remember that I had a life before him, but now it’s hard to comprehend that this could be so. I feel I always knew him, that he was always a part of me. 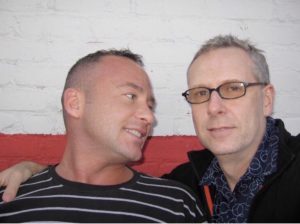 I have been extraordinarily lucky in love. There have only been a very few serious relationships in my life, and they were of such depth that I feel I understand things about the universe that I can’t even articulate. I felt so complete in my relationship with Davyd, as I also did with my first significant other Timothy Scott many years before. But when I look back honestly, without the romantic haze, both relationships were messy and complicated. Tim died a slow and agonizing death, and there was nothing I could do but witness it. Davyd suffered from recurrent battles with seizures and mental illness, frequently needing medication to alleviate both. The trauma of his abysmal childhood haunted him throughout his life and created a net of problems I would never be able to solve, hard as I tried. There were many highs and lows in both relationships that took a toll on me, both emotionally and physically. I often lived in a state of anxiety, trying to control things that were completely beyond my control, trying to hold onto the dense manifestation of matter, even as it changed right in front of me and melted through my fingers.

But there has always been something beyond the difficulty which has remained constant—something which stays the same; something that feels liberated and true, beyond harm, beyond the reach of decay. There’s something we all know but can’t define. We call it love, we call it God, we call it science, we call it nature, we call it the mystery. It really doesn’t matter what we call it, because it is ineffable. It grows and expands with our consciousness and our willingness to open up to its unfolding depth. But we must open up to all of it, if we are to be conscious, and all of it includes loss.

What is this thing within us that feels eternal? What is it that draws us to certain people and not to others? What goes on in the alchemical process of being connected to another person? And what is it that remains when they leave us? Because for all intents and purposes my inner experience is the same. Whether Davyd exists in front of me, or not, does not change the fact I love him; just as when he was alive, when he was on one end of the country while I was on the other, I carried him within me. I carry him still. Love exists. It doesn’t disappear just because the physical manifestation changes. Love exists independent of form. It is the very energy which makes up the universe.

Davyd was the kindest, smartest, most interesting person I’ve ever met. I frequently called him the best person in the world, because for me he was incomparable. And by fully loving him as I did, I came to love myself more. I saw a version of myself reflected in him that I liked. The great gift of that relationship was it gave me confidence, and sometimes I feel that was its purpose—to give me courage in my experience of the world. He came into my life and changed it, and his memory and his art continue to change me and many others. 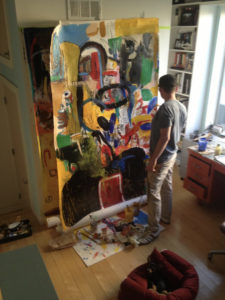 Davyd had a massive seizure on the night of October 31, 2009, almost exactly five years before he died. It was terrifying. He had no gag reflex by the time the paramedics made it to our house and they were not hopeful. I thought I was going to lose him that night. I sat with him for hours in the Cedars Sinai emergency room while he was in a coma, holding his hand while he was intubated. He woke around 5 am and I cried with relief when I saw him open his eyes. I felt like I’d been given a reprieve, another chance, a resurrection.

All of Davyd’s best work came after this event. It seemed his inspirations and his miraculous, prolific, transformative artwork sprang out of this near-death experience. He descended into the unknown—or ascended, who knows?—but then came back to me once again. I was given such a gift. Such beautiful, exquisite work came afterwards; such incredibly happy years during which we both had a creative flowering and during which neither one of us took anything for granted. But then something inexplicable happened and pulled him away again. How to describe it? I lost him, regained him, found such incredible joy, but then in 2014 lost him again, and faced utter devastation. Then slowly I began to find my way again. A continual circle through the light and the dark, like day to night to day again. And that’s just the way it is.

Looking back I cannot explain what happened to either of us, in our coming together and then splitting apart, but I feel I’ve been given insight into something that few people experience consciously. I was with Davyd for five years, then allowed to see how precious and brief and ephemeral our lives actually are, and I was given another five years with him to appreciate it fully, and now I’ve had five years to reflect on that gift. I’ve been able to see my life in such a way that my experience of it has forever been altered. Nothing bothers me in the way it once did. No amount of hardship, or success, or sadness, or happiness, can rock the way I will continue to walk forward. I am now fully present and aware, and this is the gift of loss and grief. I am conscious, I am in this moment.

It is challenging to go on without Davyd, and there have been many times when I’ve felt I don’t have the energy or desire. But then I remember—he gave me confidence, he gave me courage. That was his gift to me. I honor him for that gift. And so I’ll move forward. He will always be the guiding star ahead of me, and he is also the wind at my back.

These last five years I have had an experience of the light and shadow—both make up the totality. I accept the loss; I accept the unfolding joy; I accept my destiny. And I am not afraid. I am only ever grateful.