THE ENDURING APPEAL OF “BREAKFAST AT TIFFANY’S”

Home / Cinema / THE ENDURING APPEAL OF “BREAKFAST AT TIFFANY’S” 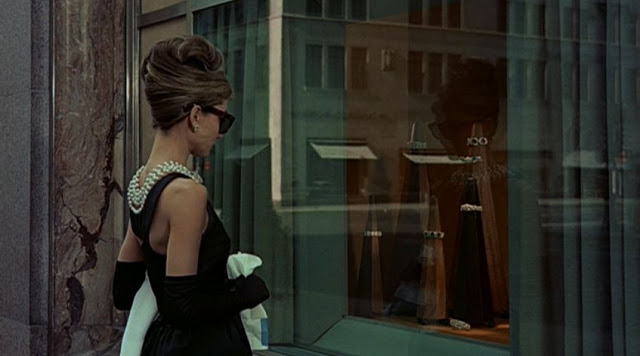 “I am always drawn back to the places where I have lived, the houses and their neighborhoods…”

The quote above is the first line of Truman Capote’s novella BREAKFAST AT TIFFANY’S. It’s a wonderful opening line–evocative, I think, because so many people are drawn back to places where they’ve lived; back to books, music, and movies they have loved; back to relationships that remain mysteriously unfinished; back to their past to make sense of their present. 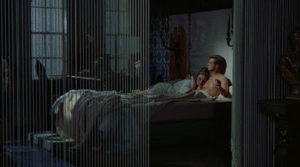 When I was six I went with my sister and some of her high school friends to see BREAKFAST AT TIFFANY’S. The film had a huge impact on me. It was the first time I became aware of adult sexuality, and the movie became emblematic for me of a world beyond my own provincial life in Texas. The fact that Holly Golightly was a call girl escaped me, because at six I didn’t even know the definition. It was only later that I realized the film was a romance between a call girl and a gigolo (for years I really believed Patricia Neal’s character was Paul’s decorator.) As a film, BREAKFAST AT TIFFANY’S has enormous staying power (in spite of the portrayal of the Japanese photographer by Micky Rooney, an offensive Asian stereotype). Walk in any bookstore and one is likely to come across Audrey Hepburn’s face staring out from a coffee-table book, with her sunglasses and black dress. The film continues to inspire fashion, design, and the imagination, and it seems as though every new young actress does an Audrey Hepburn layout at some point in her career.

It’s one of the primary references for GOSSIP GIRL and, whenever I’m roaming the streets of New York on location scouts, I’m always looking for shots that inspire the same kind of romance. The movie played a big part in my personal creative development, and it has odd parallels to my life. 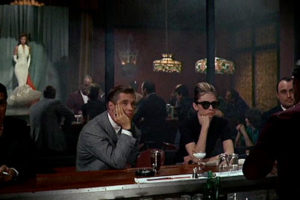 The novella’s narrator describes the primary relationship thusly: “I have a memory of spending many hither and yonning days with Holly; and it’s true, we did at odd moments see a great deal of each other; but on the whole, the memory is false….”  Indeed, as memory often is. Who hasn’t romanticized one’s own partying and romances, conveniently forgetting the hangovers and unhappiness?

But the memory of this film remains remarkably potent, and the images hold up well, capturing a place and time, and a way of being—rebellious, insouciant, cynical, ambivalent—in a seductive way. I certainly think it is Blake Edwards’ best film and reflects his wit and humor. Many would even describe it as one of the great romantic comedies. But that’s an inaccurate description—unless you’re talking tragically comic. 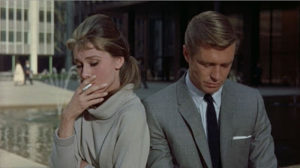 It’s essentially an unhappy story (in fact, it’s interesting to me that so many of the great screen romances are essentially stories of flawed and unhappy people.) Holly Golightly is a petulant fantasist, and Paul (as he’s called in the film—he has no name in the book) is an opportunist. Neither is presented as possessing discipline or self-sacrifice, and both seem lonely and somewhat directionless.

And though one is roped in by the alluring images and shiny surfaces, I think the power of the film is not its celebration of the high life, but how accurately it presents that high life and its counterpoint—in other words, mania-depression. As opposed to these characters’ story being a model for a relationship, it instead presents us with the sadness that lies behind the glamour and the pursuit of unrealistic romantic ideals. There is a melancholy undertow to the way in which the two relate to each other—many of the most memorable moments are sad and full of longing—not unlike the images from another film from the same period: LA DOLCE VITA (e.g. compare the shots of Marcello Mastroianni and George Peppard observing the women in their lives, compare the party scenes, etc.) 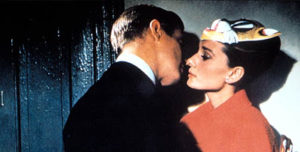 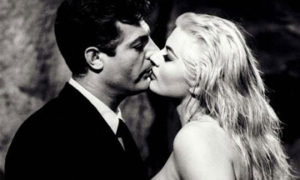 The moral of the story seems to be about striving to find personal balance in the company of another, by means of embracing human frailty, in the other and oneself. 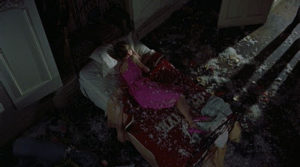 The movie is sweet and tender and powerful because it recognizes that life is full of struggle and sadness.  But that need not necessarily be a bad thing—the transformation of one’s psyche can come from embracing the difficulty, and maturity comes from growing up to meet life’s challenges and not pursuing some ineffable Moon River.

The novella and the film are more similar than I remembered.  A lot of the dialogue is word for word, but the central relationship in the book is much more oblique. There is even the implication that the narrator of the book is gay, as was Capote himself—and there is an argument to be made that the story is, probably more accurately, about the friendship of a gay man and the charismatic woman with whom he becomes fascinated. No wonder then that the movie version is a favorite gay touchstone. 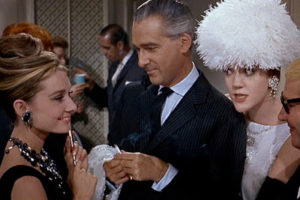 The narrative is thematically similar to Christopher Isherwood’s BERLIN STORIES, the source material for CABARET.  The fascination with Holly, mirroring the fascination with Sally Bowles, mirroring the fascination with so many other madcap screen heroines, suggests Jung’s idea of the anima, or soul-image (i.e. an internal image experienced as something mysterious and numinous, possessing great power.) According to Jung, “Every man carries within him the eternal image of the woman, not the image of this or that woman, but a definite feminine image. This image is fundamentally unconscious, a hereditary factor of primordial origin…” It makes sense that, for many gay men, this unconscious image is sometimes as rebellious, entertaining, and unconventional as Holly Golightly, crossing Moon River “…in style someday.” 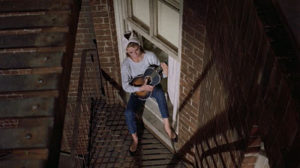 Henry Mancini’s music, which was so much a part of my childhood, was clearly inspired by Capote’s prose:  “Also, she had a cat and she played the guitar.  On days when the sun was strong, she would wash her hair, and together with the cat, a red tiger-striped tom, sit out on the fire escape thumbing a guitar while her hair dried. Whenever I heard the music, I would go stand quietly by my window. She played very well, and sometimes sang too. Sang in the hoarse, breaking tones of a boy’s adolescent voice…. There were moments when she played songs that made you wonder where she learned them, where indeed she came from. Harsh-tender wandering tunes with words that smacked of pineywoods or prairie.” 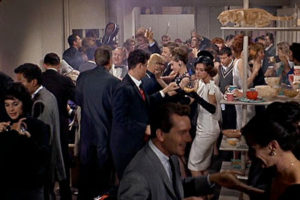 The party scene is so well-described in the book that it should have been directly transplanted into the script: “Except for a lack of youth, the guests had no common theme, they seemed strangers among strangers; indeed, each face, on entering, had struggled to conceal dismay at seeing others there. It was as if the hostess had distributed her invitations while zig-zagging through various bars; which was probably the case.” 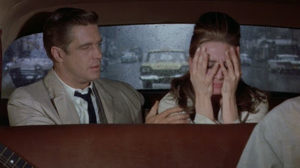 I don’t think that Audrey Hepburn was ever better. In my mind, she and George Peppard both peaked in this film—I don’t think either did any film work afterwards that equaled the indelible impression that each creates in this movie. As one watches them, there is something heartbreaking in that fact. Indeed the final moments of the film, and their performances therein, are as emotionally electrifying as anything that has been done in the cinema. 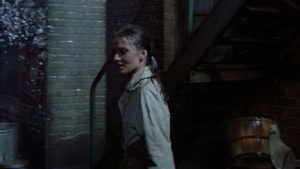 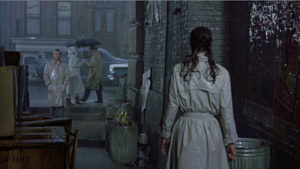 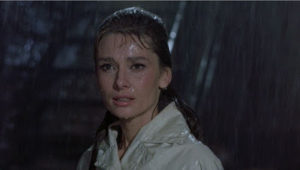 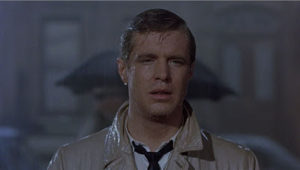 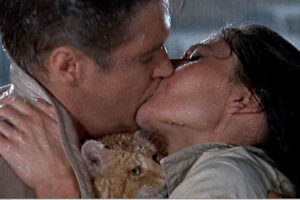 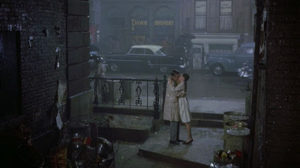 The movie, unlike the book, ends with the couple kissing in the rain, but it is raining, after all—and in spite of the power of Paul’s final impassioned plea to Holly to recognize their belonging to each other, it’s unlikely that this couple is destined for happily-ever-after. Neither of these characters feels suited to a real, committed relationship—both of them are too intrigued by la dolce vita and the shiny surfaces of Tiffany’s. This classic romantic scene feels like it might just be an interlude before one gets to the finale of the book, where the Paul character, 15 years after the fact, hopes that Holly, wherever she is, has found peace and happiness.