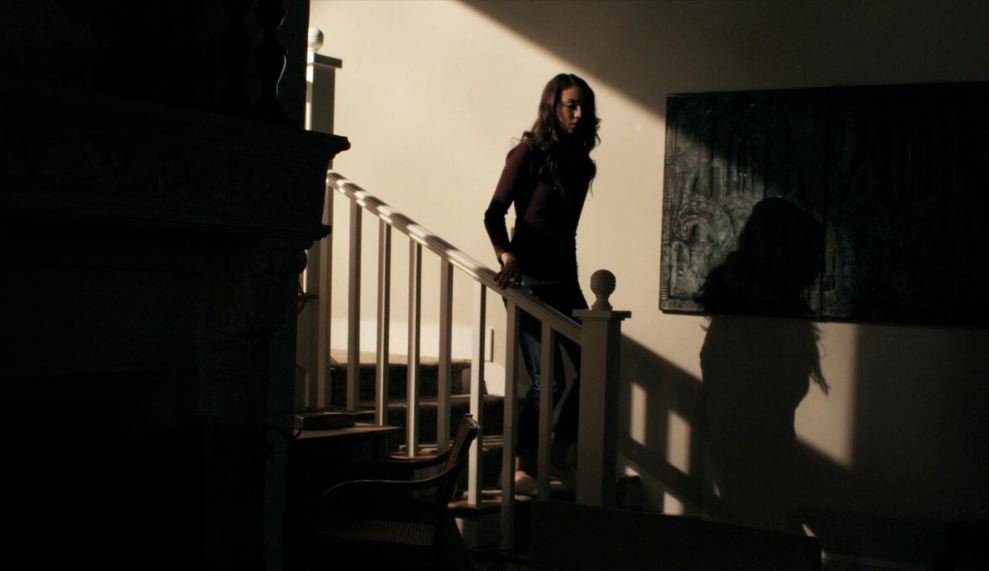 “Hopper has been a huge influence on me. His work is grounded in an American sensibility that deals with ideas of beauty, theatricality, sadness, rootlessness and desire. I think it is now virtually impossible to read American, visually, without referring back to the archive of visual images created by artists who found inspiration in Hopper’s paintings. His art has shaped the essential themes and interests in the work of so many contemporary painters, writers, and, above all, photographers and filmmakers.” –Gregory Crewdson

This last April, I directed two episodes of the new television series PRETTY LITTLE LIARS (executive produced by I. Marlene King and Oliver Goldstick). It’s always stimulating to work on a new show–the tone is still being determined, the style is evolving, and there’s the opportunity to try things that later might feel out of sorts.

In this case, when I arrived at the production offices, I noticed photos of Edward Hopper’s work everywhere—in the production designer’s office and all of the writers’ rooms. I was excited by the idea of using Hopper explicitly as a reference. As evidenced elsewhere on this blog, I am a huge fan of Hopper. I have been looking for a long time to draw upon his work to enhance my own. 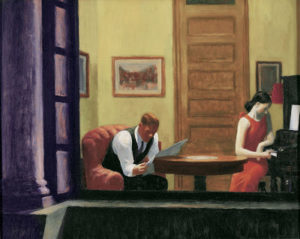 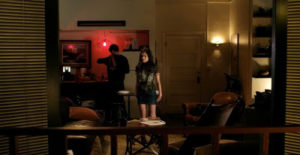 Hopper and an ABC Family show, aimed at a young teenage girl demographic, may seem incongruous at first, but only at first. PRETTY LITTLE LIARS is a smart, clever show and, like Hopper’s art, examines private moments, and the mystery that exists within the commonplace. The show revolves around the differences between the public and the private—each of the girls has an inner life that is somewhat at odds with her persona, and there is a voyeuristic quality to its narrative. We watch people in the same way that Hopper seems to catch them, unaware that they are being observed. 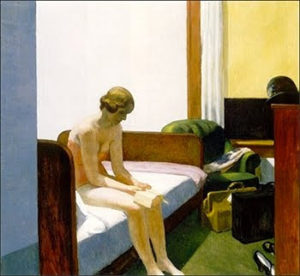 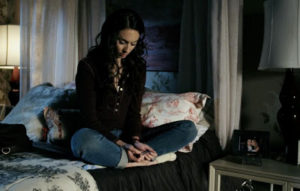 Like GOSSIP GIRL, style drives the show—the girls are beautiful and the clothes are fabulous. But whereas GOSSIP GIRL focuses on romantic melodrama in the big city, PRETTY LITTLE LIARS concerns itself with the secrets of a small town. The girls are all somewhat troubled—one has issues around food and body-image, and she shoplifts; another is essentially OCD and cheats to get ahead; a third is confused about her sexual identity; and the fourth becomes involved with her English teacher. The parents are dysfunctional as well and have secrets of their own. The drama unfurls at warp speed:  the pilot episode includes murder, infidelity, teacher-student romance, alcohol and drug use, shoplifting, lesbianism, sibling rivalry, anonymous texts, mysterious blind girls, and a cop extorting sex from one of the girls’ mothers. In many ways it’s reminiscent of PEYTON PLACE, but on the other hand it references TO KILL A MOCKINGBIRD–the latter is frequently mentioned in the first few episodes, specifically in relation to the loss of innocence. The show is also incredibly funny—it frequently employs dark humor, playing off of our paranoia and suspicion, making the viewer laugh in surprise and delight. Everyone seems to be lying to everybody else.

The visual template of PRETTY LITTLE LIARS emphasizes many of these themes. The production design and photography combine to create a world that is both familiar and mysterious. The lighting evokes the photographs of Gregory Crewdson, an artist who inspires me in the same way as Hopper. A 2006 NPR profile said about Crewdson: “It’s the moment between then and now that interests Crewdson—he likes that photography limits him to choose only one moment to convey a narrative arc.  Each photo is polished and technically perfect, but still somewhat undone.  The viewer must imagine what comes before and after.  Crewdson says his pictures must first be beautiful, but that beauty is not enough.  He strives to convey an underlying edge of anxiety, of isolation, of fear.” 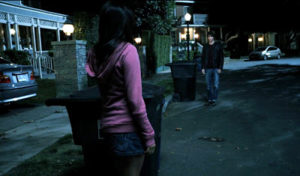 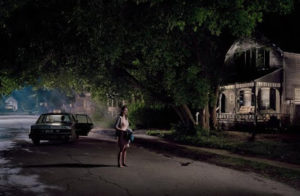 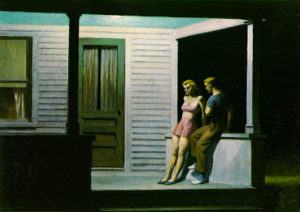 TOP:  A frame from PRETTY LITTLE LIARS, Emily (Shay Mitchell) feels conflicting emotions about the approach of Toby (Keegan Allen).  Is he a friend or a threat?  MIDDLE:  An evocative photograph by Gregory Crewdson, from his book BENEATH THE ROSES.  BOTTOM:  SUMMER EVENING by Edward Hopper, collection of Mr. and Mrs. Gilbert H. Kinney.

That last sentence could sum up the world of adolescence—a six to eight year period with “an underlying edge of anxiety, of isolation, of fear.” And many of the frames in PRETTY LITTLE LIARS capture that sense of in-between: adulthood looms ahead and anything might happen. (In my first episode, one of the girls describes walking with her absent father around an amusement park—she wants to remain his little girl, to reclaim her childhood, but she’s about to be cruelly disabused of this notion. It seems somehow appropriate to put her in a frame that evokes “Nighthawks”, with its sense of sleeplessness. Perhaps it’s time for her to wake up to adulthood and all of its anxieties.) 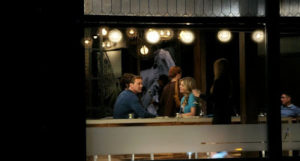 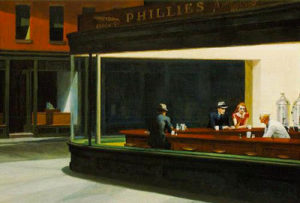 TOP:  Hannah, played by Ashley Benson, sits cozily with her dad, played by Roark Critchlow, at the counter in a diner, but adulthood looms in the dark outside.  MIDDLE:  The most famous of Edward Hopper’s paintings:  NIGHTHAWKS.  BOTTOM:  AUTOMAT by Edward Hopper.  A warm cup of coffee holds off the encroaching dark.

As soon as I started reading my first PLL script, the opportunities to play with some of Hopper’s compositions leapt off the page (Joe Dougherty’s writing is very visual.) Hopper’s paintings are filled with evocative female figures—they often seem deep in thought, considering their next course of action. And Crewdson’s pictures as well capture this kind of visualization of a character’s inner life. 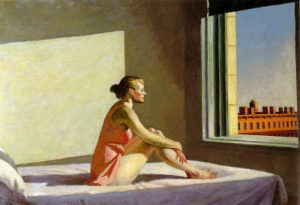 The town of Rosewood doesn’t feel so much like a real town as a state of mind. Since PRETTY LITTLE LIARS is shot almost completely on the Warner Brothers lot, there is a dreamlike quality to some of the compositions, feeling melancholy and mysterious, very Hopper-esque. 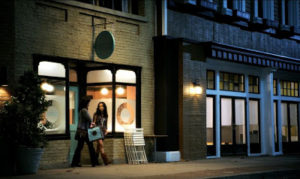 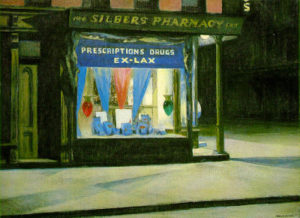 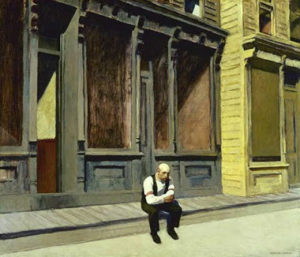 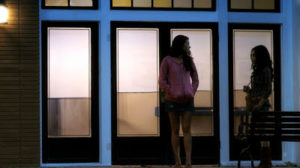 TOP:  A wide shot of the backlot town of Rosewood, the locale of PRETTY LITTLE LIARS.  MIDDLE TOP:  DRUG STORE by Edward Hopper, feels also like it could be on a back lot.  MIDDLE BOTTOM:  SUNDAY by Edward Hopper.  BOTTOM:  Emily, played by Shay Mitchell, and Maya, played by Bianca Lawso, on a Rosewood street, which could be out of a Hopper painting.

Alain de Botton writes about Hopper: “The figures in Hopper’s art are not opponents of home per se; it is simply that, in a variety of undefined ways, home appears to have betrayed them, forcing them out into the night or on to the road. The 24-hour diner, the station waiting room or motel are sanctuaries for those who have, for noble reasons, failed to find a place of their own in the ordinary world.  A side-effect of coming into contact with any great artist is that through their work we start to notice things we can understand, but previously hadn’t thought worthy of consideration. We become sensitized to what one might call the Hopperesque, a quality now found not only in Hopper’s North American locales, but anywhere in the developed world where there are motels and service stations, roadside diners and airports, bus stations and all-night supermarkets. Hopper is the father of a whole school of art that takes as its subject matter threshold spaces, buildings that lie outside homes and offices, places of transit where we are aware of a particular kind of alienated poetry.…


It’s a curious feature of Hopper’s work that although it seems concerned to show us places that are transient and un-homely, we may, in contact with it, feel as if we have been carried back to some important place in ourselves, a place of stillness and sadness, of seriousness and authenticity: it can help us to remember ourselves….This visual dynamic has a psychological equivalent within our own minds: we are made aware of constellations of ideas and moods distinct enough to feel like different personalities – an inner fluidity which can on occasion lead us to declare, without any allusion to the supernatural, that we are not feeling as if we are ourselves.  On looking at a picture, we may recognize it as important to us, but out of our ordinary reach. By buying a postcard reproduction and hanging it prominently above the desk (as I have done with a number of Hopper’s works), we may be trying to have it as an omnipresent, solid token of the emotional texture of the person we want to be and feel we are deep down. By seeing the picture every day, the hope is that a little of its qualities will rub off on us. What we may welcome isn’t so much the subject matter as the tone; it is the record of an emotional attitude conveyed through color and form. We know we will of course drift far from it – that it won’t be possible or even practical to hold on to the picture’s mood forever, and we will have to be many different people (with bold opinions and a sense of certainty, with casual wit and parental authority) – but it is a reminder and an anchor that will tug us back to the qualities within it.” 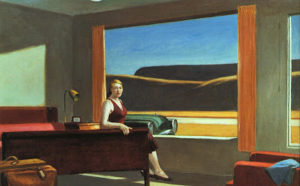 TOP:  An office building on the Warners backlot is transformed, by Rachel Kamerman and her wonderful staff, into a small town motel in PRETTY LITTLE LIARS.  MIDDLE:  A photograph by Gregory Crewdson, of a motel scene at night.  BOTTOM:  WESTERN MOTEL by Edward Hopper.

Gregory Crewdson writes: “Hopper depicts a world that is at the same time beautiful and sad, familiar and strange, inviting yet ultimately inaccessible. I think these polarities are at the center of his work and may indicate why so many artists, including myself, are drawn to it, again and again.”

That says it better than I can.