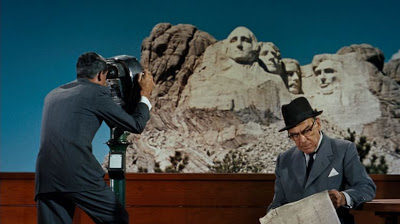 Hitchcock’s films have been fundamental touchstones for my creative development–particularly the way in which he uses his films to explore modern man’s psyche in the mid-twentieth century (I was born in 1955 at the height of his power as a filmmaker).

From my viewpoint, Hitchcock was always a little disingenuous by telling people he was just an entertainer. From early in his career he was using film to examine human behavior in a way as sophisticated as any psychologist. Some of the themes are explicit (SPELLBOUND, UNDER CAPRICORN, VERTIGO, MARNIE). Others more disguised, hidden under the surface of the mystery and the entertainment values.

Andrew Sarris wrote in his review of PSYCHO, “Hitchcock is the most daring avant-garde filmmaker in America today. Besides making previous horror films look like variations of ‘Pollyanna,’ ‘Psycho’ is overlaid with a richly symbolic commentary on the modern world as a public swamp in which human feelings and passions are flushed down the drain.”

Even Hitchcock films that are considered lighter entertainment—like NORTH BY NORTHWEST—can be analyzed for their insightful examination of human behavior. After all, what is the journey of Roger Thornhill (played by Cary Grant), if not the journey of a man towards self-realization? In his essay on NORTH BY NORTHWEST, Steven Patterson writes, “In the opening moments of the film, to his secretary, we see Thornhill dictate an insincere note to what is obviously a girlfriend.  He also ‘steals’ a cab on the false premise that his secretary, Maggie, is sick.  His line to Maggie, in the cab after she protests about his taking it with a lie, sums up his character nicely: ‘In the world of advertising there is no such thing as a lie, Maggie. There is only the expedient exaggeration.’ All of this marks Thornhill as a relatively shallow and self-interested man—a far cry from the sort of man who fakes his own death and races across Mount Rushmore to save the woman he loves.”

I’ve long been drawn to Carl Jung’s ideas about psychic development. Jung writes, “One could say, with a little exaggeration, that the persona is that which in reality one is not, but which oneself as well as others think one is.” Hitchcock’s films are peopled with those who pretend to be one thing and yet, thru the crucible of experience, are shown to be something else. I’m particularly struck by the multiple ways in which Hitchcock visually explains this to us. 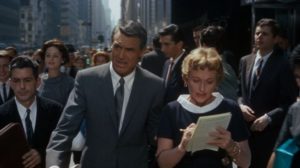 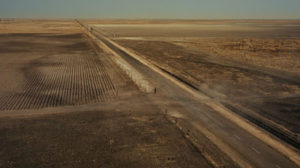 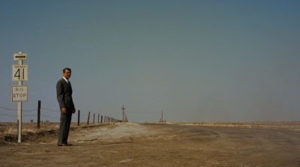 Thornhill is shown at the beginning of the film in an elegant business suit, in a position of authority, surrounded by people, as he exits a building on Madison Avenue. Compare this with the shots of him standing in the open on the mid-western plains, without the trappings of success and autonomy (he has no mode of transport once he gets off the bus.) Who exactly is he at this point? Does it matter in the slightest that he’s a successful Madison Avenue executive? That fact is meaningless–it won’t save him. It is only his primitive desire to survive, and his own internal resources–his willingness to be courageous in the face of attack–that is his salvation. 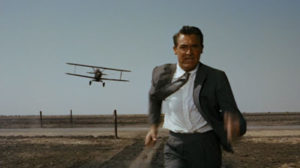 He is furthermore literally stripped, throughout the film, of his clothes as the events unfold. To my mind, this is a visual way of indicating how he’s stripped down to an essence that is without definition, and then a new awareness is able to arise within him.  This awareness transforms his personality. NORTH BY NORTHWEST is essentially the hero’s journey. 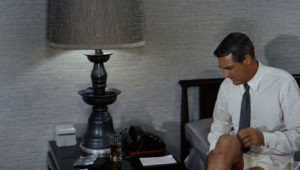 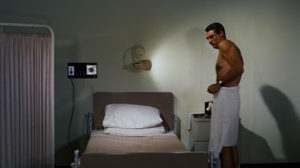 The climactic chase on Mount Rushmore becomes a heroic statement of a new, more authentic identity–contextualized by the faces of American men with big ideas.

THE BIRDS is another film that strikes me as worthy of contemplation on a psychological level. Its metaphors are very powerful. As far as I’m aware, Hitchcock never explained the movie, but it was made at the height of the cold war and I think that this fact informs its themes (I remember that when the movie came out my dad was talking about building a bomb shelter in our backyard). Among other ideas, the bird attacks can be seen as a metaphor for nuclear war, for that for which we are unprepared, and for that which is beyond our ability to comprehend. 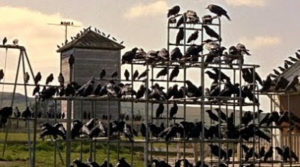 To be sure, the movie is remembered for the dramatic bird attacks, but it also is full of images, without the birds, that suggest the character of the American psyche at a particular point in time—one of paranoia and suspicion (that, quite frankly, persists to this day). It suggests a society that is frightened, and one that lets its fear run it. 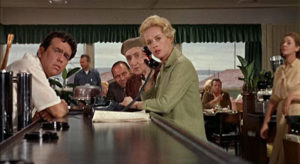 The diner scene is one of my favorite scenes in the film, because it dissects the typical American suspicion of the other.  Each of the characters in the diner represent various archetypes, and the scene is reminiscent of those diner interviews that one sees on cable news channels, where people seem convinced that Iraq is behind 9/11.

One of the reasons the film still resonates is that it is as topical today as it was then. Just substitute terrorism for bird attacks, and then take a look at the shots throughout the film of people reacting. 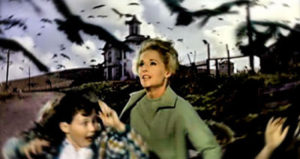 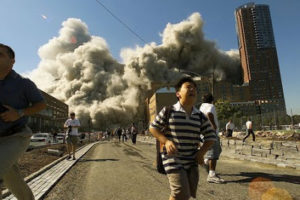 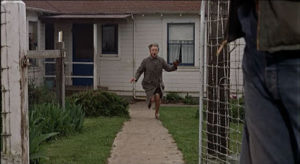 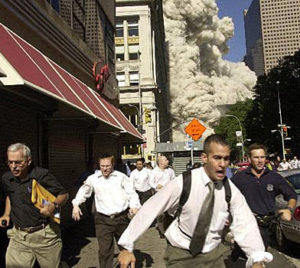 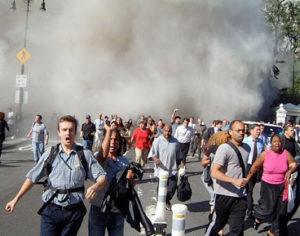 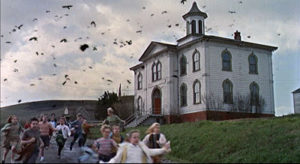 On a more specific level, there is also the theme of an arrested adolescence. Mitch Brenner (played by Rod Taylor) is a man who still lives with his mother, unable to commit to a relationship. Again, the challenge of the experience forces him to come out from under the shadow of his father and to separate himself from the mother so that he might be able to be a man in his own right. 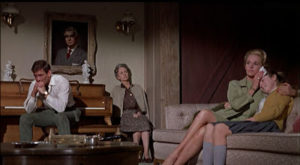 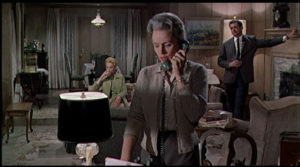 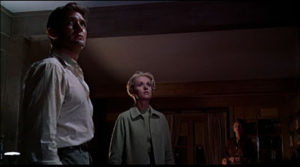 The way that Hitchcock positions his actors in the frame is no mistake.  Mitch Brenner is framed under his father’s portrait, and his mother is frequently framed between him and Melanie Daniels.  As he rises to the occasion of fending off the birds–by implication, becoming his own man–the positioning changes.  Melanie stands between him and his mother, and the mother becomes smaller in the frame.

If one thinks about the film from this point of view, there is something very courageous and hopeful about the final shot of the movie—we see a group of people, finally united, in a positive way, and moving into the unknown, into the very middle of that which scares them. They’re scared but they’re brave and willing to face what comes. The sun is even breaking through the clouds in the distance. As a metaphor for psychological processes, it is very dynamic—it is only by facing our fears that we overcome them. I always thought that it was indicative of one’s own state of mind as to whether one found this final shot hopeful or despairing. I’m in the hopeful camp.